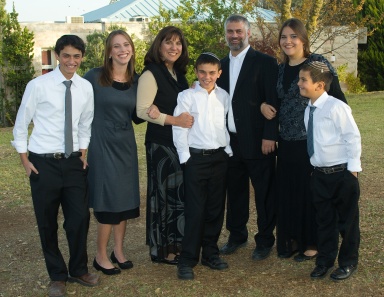 I am an educator, tour guide, speaker and writer living in Gush Etzion, Israel.

I currently serve as a Ra”m (senior Talmud teacher) at Midreshet Torah V’Avodah in Jerusalem.  I am also a licensed tour guide who works with groups, families and individuals, specializing in educational tours. In addition, I am a speaker and lecturer on various topics related to Torah study, Israel and Jewish education, and a writer, editor and translator for various Torah publications including the Koren Talmud Bavli.  Previously,  I was one of the founders of Michlelet Mevaseret Yerushalayim (MMY), and its Director for sixteen years.  I’ve also taught at other Jerusalem-based institutions including Nishmat and Matan.

I was born in Brooklyn, NY on the 28th of Iyyar, 5727 – June 6, 1967.  Those familiar with modern Israeli history will note that this was the third day of the Six Day War, and the very day on which the Old City of Jerusalem was liberated (in other words, the day we now observe as Yom Yerushalayim. On that very same day, the area known as Gush Etzion – where I now live – was liberated as well.   In 2007, in honor of the 40th Yom Yerushalayim, a local English-language magazine published an article telling the amazing story.)

I grew up in a traditional (but not Orthodox) home.  We moved to New Jersey when I was four years old, and my parents had intended me to go to public school, just as they had.  But I was one of only two Jews in my kindergarten class, and this was not what they wanted.   So they enrolled me in a local day school and  my formal Jewish education began.  A few years later, we moved to Livingston, NJ – a much more Jewish area, and joined the Suburban Torah Center synagogue.    Largely due to my father’s influence and with the help of Rabbi Moshe Kasinetz of the synagogue, our family slowly became fully observant.

As a teenager, I became very involved in the New Jersey region of NCSY.  During my senior year of high school I served as Regional President, and it was then that I realized I wanted to make a career of Jewish education.  After high school I studied at Yeshivat Har Etzion and Yeshiva University, ultimately earning a B.A. in computer science, a master’s degree in Medieval Jewish History, and smicha (rabbinical ordination).  Later on, when I was in my mid-forties, I took an intensive two-year course at Haifa University‘s School of Tourism, to become licensed as a professional tour guide.

Shortly after we got married, my wife Monica and I spent a year in Israel as I continued my studies at Yeshivat Har Etzion.   During that year, we came to two decisions: that we wanted to live in Alon Shvut (where the yeshiva is located), and that I wanted to devote my teaching career to the education of young women.  At the end of that year we returned to the States and I accepted a teaching position at Bat Torah Academy, a small and quite unique high school for girls that (sadly) no longer exists.

A few years later I became one of the founders of MMY, and a year later came on Aliya and assumed the position of Director there.  I remained in that position for the next sixteen years, until June, 2013.   In addition to my administrative role there, I taught classes  on Halacha (Jewish law), Tanach (Bible), Talmud and Machshevet Yisrael (Jewish thought).

I live in Alon Shvut with my wife and my five wonderful children: Sara, Batsheva, Moshe, Tzvi and Elchanan.  I consider it a unique opportunity to live in such a beautiful and historic area, as well as in this amazing community, surrounded by many great Torah scholars and individuals who are dedicated to the causes of Am Yisrael and the State of Israel.