Twice this week, I led my students at Yeshivat and Midreshet Torah Va’Avoda (respectively) on short night-time walking tours through Katamon, the Jerusalem neighborhood where they live and study.  Our destination was the San Simon Monastery, located in a beautiful park at the top of the neighborhood.  Our purpose, though, was not to enjoy a pleasant walk in the park, nor to visit the monastery. We went there learn about and reenact the dramatic and decisive battle  that raged there on the final day of Passover 5708 – April 30, 1948. 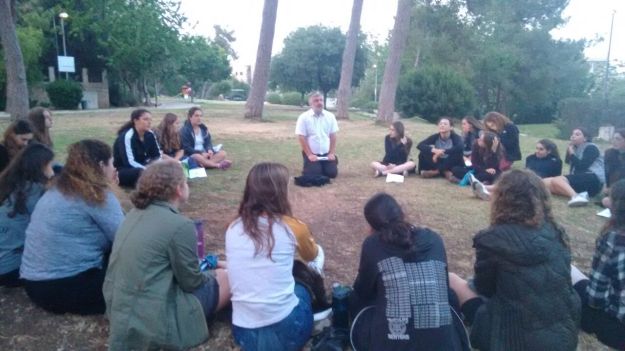 At the beginning of the tours, I discussed the two commemorative days we’ll be observing this coming week: Yom HaZikaron (Israel’s Memorial Day, on Sunday night and Monday) and Yom HaAtzmaut (Independence Day, Monday night and Tuesday).  As anyone who’s been in Israel at this time of year can testify, the moods of these two days are quite different; in fact, they almost seem like opposites – the first is a day of national mourning, and the second of celebration. The sharp transition caused by the observance of these two days in immediate succession is very difficult emotionally, and also deeply profound.

I asked the students which of the two days they thought we’d be preparing for on the walking tour. Of course, the answer was both. Like many other incidents in Israel’s history, that battle was simultaneously tragic (21 Jewish soldiers were killed and many others wounded), and triumphant (it proved decisive in saving the Jewish neighborhoods of western Jerusalem and enabled the city to become Israel’s capital). So, I told them, when we are mourning next week on Yom HaZikaron, you can think about the things you will hear tonight, and you can think about the exact same things while dancing on Yom HaAtzmaut.

This paradoxical reality may be reflected in a somewhat cryptic comment made by Rashi about these verses at the beginning of the Torah:

What, Rashi wonders, were things like before God “divided” the light from the darkness?

It seems, he says, that the original reality was a confusing state described by the graphic expression “ohr v’hoshekh mishtamshim b’irbuvya” – light and darkness were coexistent and intermingled. Since the light was “good”, however, God decided that this was not appropriate, and so He separated them into light/day and darkness/night.

Many see this imagery as a powerful metaphor for the great but confusing period we are living through today. On the one hand, as we approach Israel’s 69th anniversary, with close to half of the Jews in the world already living in our homeland, and with our economic and security situation constantly improving, it seems quite clear that the miraculous redemption promised by the prophets is well underway. But at the same time, it is also painfully evident that our pain and suffering have not yet ended, and we still face many grave dangers.

Just as the very beginning of the world’s existence was characterized by a confusing mixture of light and darkness (ohr v’hoshekh mishtamshim b’irbuvya), a similar intermingling exists now, at the dawning of the messianic era. Each year, the sunrise of the redemption progresses and the daylight shines more and more brightly – but the night of the exile is not yet over, and darkness continues to overshadow us.

This is a paradox, but it is as true today as it was 69 years ago when the Palmah soldiers were holed up in the monastery of San Simon. At the time, with bullets flying, bombs exploding and their comrades dying, they probably couldn’t have imagined that they were laying the foundations of a beautiful park in a lovely neighborhood in the sovereign undivided capital of the Jewish state.

A generation or two from now, similar words will be written about us and the painful events we’ve experienced over the past months and years. Eventually, when the sun finishes rising and the darkness recedes completely, it will all be clear. Until then, we must mourn and dance on the same week – and perhaps ponder these mysteries while strolling through a Jerusalem park.