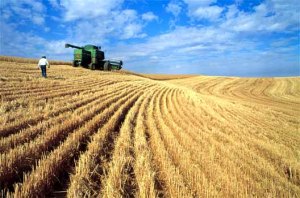 A few hours from now, the Shemita year will come to an end.  Since the Torah describes Shemita as Shabbat HaAretz (the Shabbat of the land), that makes today sort of like those final moments at the end of the third Shabbat meal, as the sun sets and Shabbat comes to an end.  Each week, those moments are traditionally spent singing slow songs and reflecting on what we’ve learned and experienced.  I think the same should apply to Shabbat HaAretz, so let’s take a few minutes to do exactly that.

Exactly one year ago, a few hours before Rosh HaShana 5775, I wrote a post describing the awesome once-in-seven year opportunity we have here in Israel, as Shemita was about to begin.  A bit later on I wrote a second post discussing the practical dilemmas that observant consumers face during Shemita, regarding which produce to consume and which halachic positions to follow (by the way, these halachic questions remain relevant for at least another 6-8 months, until all of the fruits and vegetables from the Shemita year are used up and next year’s crops become available).

Over the course of the year and as recently as this morning, I’ve also had the privilege of giving many classes and lectures about Shemita, and leading many Shemita tours in which I took families and groups out on “field trips” (sorry – couldn’t resist the pun!) to learn about different aspects of this mitzva up close and meet heroic farmers who made great sacrifices to observe it.  In these final moments “as Shemita ebbs away”, I’d like to share one insight that I learned from a teenage girl on a seminar I spoke at earlier this year, and from a woman on one of my tours.

In a number of places, our rabbis tell us that Shemita is the key to Redemption.  In fact, the Talmud (Sanhedrin 97a) even says that the Messiah is destined to come immediately after, and perhaps as a result of, a Shemita year.  The question, of course, is why this is so; what is the specific connection between Shemita and Redemption?

Whenever I speak about the various halachic approaches to Shemita, I express my strong preference for obtaining and consuming produce grown on Shemita-observant farms and marketed through the Otzar Bet Din system.  I prefer this method to all others, because I believe that it is the contemporary option that comes closest to the ideal that the Torah envisioned.  On Otzar Bet Din farms, the laws of Shemita are fully observed and the farmers refrain from all forbidden labors.  The farmers are also not able to sell their produce for profit, and instead are paid a fixed salary as employees of the Bet Din (the religious court that runs the farm during Shemita).

In theory, the produce is supposed to be distributed to the public for free, in keeping with the Torah’s law that all agricultural produce is ownerless this year.  However, in the current system the Bet Din does not have the financial resources to meet its obligations, and therefore has no choice other than to charge a service fee for the produce it distributes.   The net result of this is that the consumers need to pay a fee for each kilo of produce they obtain, and it winds up looking and feeling pretty much exactly the same as the way in which we buy our produce in other years.  For this reason, many people are unhappy with Otzar Bet Din and (mistakenly) view it as a meaningless formality.

When speaking at a seminar about Shemita earlier this year, I acknowledged this weakness, and explained to the participants how I think Otzar Bet Din would work in an ideal world.  The costs for running the farms would be paid in full by the government, with funds from the State budget.  The produce would be distributed to the consumers genuinely free of cost (I have a whole idea of how this can be done with a computerized database indicating how much of each type of produce each person is entitled to each week and distribution points where magnetic cards can be swiped to ensure that everyone gets only what they are entitled to), and in that way actually accomplish more of the socio-economic aspect of what the Torah actually envisioned.  I told the participants that I am sure this is how it will be done when the Messiah comes.

It was at that point that one girl raised her hand and said “I don’t understand.  Why does this have to wait for the Messiah to come?  Why can’t we implement that system right now?”  I thought about it for a moment and said, “You are right.  In principle, there is no reason we can’t do this right now – if the Jewish People would want to.  The problem is simply that most people aren’t yet ready to agree to such a concept.”

I few weeks later on a Shemita tour, I quoted this girl to a group I was leading, and one of the women suggested that this could be a project we should all work on.  We have seven years to convince people to do it – let’s get the Knesset to pass a law implementing and funding a national Otzar Bet Din for the Shemita of 5782.

Is this realistic?  I don’t know.  But it did make me realize one fundamental truth: many aspects of what we are waiting for in the Messianic Age are not up to God; they are up to us.  If only all of us wanted it, we could make it happen by just doing it ourselves.  So who is going to bring the Messiah anyway?  Is it something that God needs to do for us?  Or something we need to do for ourselves?

Certainly there are aspects of both.  But Shemita observance gives us an opportunity to see how much of this is really in our control.  Maybe that’s why Shemita is so closely connected to the Redemption.

So as we prepare to “make Havdalah” and move on to the auspicious post-Shemita year, let’s all contemplate that and think about what each of us can do to make this the Motzaei Shviit she-Ben David Ba (the post-Sabbatical year in which the Messiah comes).

1 thought on “As Shemita Ebbs Away”