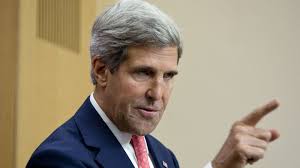 In the latest round of Israeli-Palestinian negotiations, Prime Minister Netanyahu is insisting that the Palestinians accept the definition of Israel as a “Jewish state”.  While U.S. Secretary of State John Kerry appears to support that demand, Palestinian Authority head Mahmoud Abbas is reportedly refusing to accept it.  Abbas argues that democratic principles require Israel to give exactly equal treatment to all citizens, and to all religious and ethnic groups.  Since some of Israel’s citizens are not Jews, he says it would be unfair to define Israel as “Jewish”.

Abbas himself, of course, is a total hypocrite. Just yesterday he once again insisted that not one single Jew would be allowed to live in the Palestinian state he wants to form, and even admitted that his administration incites to violence against Jews. He has no right to lecture us about democracy.

Our opponents in the BDS movement, who are beginning their next “Israeli Apartheid Week” in a few days, argue that we are no different than South Africa once was – a country that unfairly privileges one group and discriminates against others.  These people insist that the only way we can absolve ourselves of the crime of racism and oppression is by turning Israel into a democratic “state for all of its citizens” and removing any special status for Jewish people or the Jewish religion. This would include symbolic steps like changing our national anthem, flag and possibly even the name of the country, as well as more substantive matters like changing the laws that reflect Israel’s Jewish character. That would include the Law of Return.

But what about the issue itself?  There’s plenty of anti-Semitic hypocrisy in the BDS movement as well, and it’s easy to point out their one-sided distortions and outright lies, not to mention the fact that Arabs in Israel have more civil rights and freedoms than in any Arab country.  That’s all 100% true. But let’s be honest. It doesn’t really address the issue. The fact is that in Israel, many laws and policies favor Jews and Judaism, and give them privileged status over non-Jews and other religions. How is that fair?

Well, let’s consider what would happen if we agreed to the demands and made the necessary changes. We’d have to stop allowing Jews to make aliya. And the next time Jews can’t stay in their countries of residence or begin to feel endangered by anti-Semitism (as may very well happen in parts of Europe at some point over the next few years), we wouldn’t be able to take them in as we did for the Russian and Ethiopian Jews in the 1990s. They would have nowhere to go.

And if the Palestinians ever become a majority in Israel, what sort of laws would they pass? How would a police force and army under Palestinian direction treat Jewish people and Jewish holy sites? Israeli Jews would also have nowhere to go.

Although Palestinian spokespeople and their supporters around the world deny that Jews ever had a connection to this land and view us as foreign invaders, the historical reality is that since our exile from this land we have been to pretty much every country on earth, and while we have been able to stay in some of them for quite a while, we’ve never been able to make our permanent homes anywhere else. Asking us to turn our country into an American-style democracy is asking us to commit national suicide.

We’re not an apartheid state. We do – as we should – concern ourselves with making sure that the minorities in our midst are treated as fairly as possible.  If we fail at this sometimes, we can and must correct those errors. But we must remain a Jewish state (even if even we can debate whether or not it’s 100% democratic), because to do otherwise would mean the end of the Jewish People.

This may make us uncomfortable, but it is a reality.  As Bilaam ben Beor told us thousands of years ago, “Am Levadad Yishkon” – we have always, and will always, dwell alone.

We have a unique role in human history, and sometimes that means we simply operate with different rules.